Herbertpur Christian Hospital began its nursing school three years ago. They have 30 students in each session, 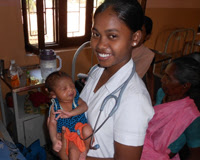 half from the government and half who come on their own as Christians. They were initially hesitant to accept government students, but it has turned out to be a form of outreach, with three students recently accepting the Lord. The instructors work hard to teach the students values and develop them as people.

Typically, the training process for both doctors and nurses in India is very selfish with a focus on self-promotion: how to pass the exams, get a great job, and make as much money as possible. But at Herbertpur Nursing School, the instructors strive to teach their students how to be caring and compassionate with all patients. They learn how to demonstrate their values in their speech, attitudes, and actions. In their second year, the nursing students go to visit and learn from another hospital, and they are immediately recognized as being different. They are among the best students and are sought after upon graduation because others have a positive professional opinion of them. Even though the pay is significantly lower, most of these nursing students choose to stay within EHA upon graduation, but those who do go elsewhere are sent out as salt and light.

They also have a one-month pre-nursing curriculum called Dilase (“from the heart”) that the students go through to set the tone before they begin nursing courses. They have trained tutors to teach this curriculum that focuses on values, commitment, and personal development. They have now used this curriculum for all nursing staff, not just students, and are considering requiring this curriculum for the doctors as well.

Herbertpur is currently putting up the infrastructure for a new building for the nursing school, partially financed by the efforts of Living Truth ministries. The second phase will include a new building with a student cafeteria and hostel. The cost will be about $23,000, and supporters in Switzerland are funding half of this project so far.

The cost of a year of nursing school for each student is 65,000 rupees, or $1,000. The addition of food and housing brings the cost to 100,000 rupees, or $1,500. Despite the fact that this amount wouldn’t pay for one biology class in a US nursing program, this is significantly more than many young women’s families can raise, so often they are given partial support from the school. Students who are promising and who deserve the help are admitted despite being short on finances. The chance to become a nurse provides a pathway out of poverty for these women, and they often have no other option for schooling that will help them obtain a professional job like nursing. And often, once a young woman becomes a nurse and begins to earn money, she will help support her parents and siblings. So when you help a young woman become a nurse, you are not only helping her and her future patients, you are helping a whole family rise out of poverty.

If you would like to give to help fund the new nursing facilities, or to support a young women desiring to better her life and the life of her family, you can go to our donations page and choose the Nursing Education Fund in the drop-down menu.