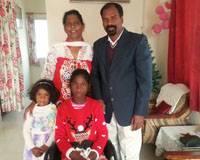 counseling and support offered through the Anugrah Disability Project. His daughter, Grace, has cerebral palsy and is confined to a wheelchair, and he was struggling to see what God’s purpose was in her infirmity. By the end of his stay, Pastor Inderamani was determined respond to his situation by reaching out into the community to help others. He went back to his church and spoke to the members, and they decided to hold a disability meeting once a week to which parents of children with disabilities would be invited. At these meetings, people began to learn more about disabilities as the families spent time together and shared their life stories.

Pastor Inderamani was thankful for the support this new ministry was providing to these families, but he was still struggling to see how God would be glorified in the difficulties his daughter faced. But then something exciting happened. Grace spent part of each day outside on the patio in her wheelchair. While she couldn’t speak, Grace would wave and smile at those going by. One lady saw her wave every evening and eventually stopped to ask the pastor what was wrong with his daughter. Their conversation led to the sharing of the gospel, and now this woman attends the pastor’s church and is a believer. So even though his daughter could not speak, God used Grace to bring this woman and her family to belief. Pastor Inderamani could now see a redemptive purpose to Grace’s condition, and he began to feel that it was not such a burden. His faith has been stretched to believe that God is good even in the very difficult circumstances of life.

A Publication of EHA USA | December 2015